The robustness of the American Staffordshire does not exempt it from certain illnesses. In addition to common canine problems, the AmStaff may be victim of genetic illnesses such as cerebellar ataxia. However, we emphasise that it is not the only dog to suffer from this; it is simply included in the list of breeds at high risk. We also remind you that this is not contagious, but hereditary.

The description of the illness in the Am Staff is a recent one. Until 2002, practically no serious studies had been carried out. Using this knowledge, the illness which affects Am Staffs was called hereditary cerebellar ataxia in ASTs (American Staffordshire Terrier). It causes degeneration of the nervous system and cerebellum.

Function of the cerebellum

Whilst the cerebellum is not directly involved in motor activity, it is nevertheless an important factor. It allows a control over fine movement coordination, maintaining balance and participates in muscular tone. If the cerebellum is affected there are clear symptoms which appear for the Am Staff.

Symptoms mainly affect its psychomotor skills and firstly appear as a slight lack of motor coordination: hearing and vision losses, trembling, stumbling, falling, muscle contractions (myokymia). The illness may span a number of years between remissions and flareups, ending in total disability.

Your dog’s behaviour is not directly affected by the illness. However, pain and suffering may make it more withdrawn or depressed as its motor function reduces.

Cerebellar Ataxia in the AST

This is defined as an autosomal recessive condition: two individuals who are carriers of this gene (father and mother) are required for this illness to occur. A single gene simply predisposes your dog to be a carrier. It normally occurs between 2 and 9 years of age, with a greater incidence between 3 and 5 years of age. Genetic screening tests are available if there is any doubt. There is no treatment against this illness and any reproduction using dogs carrying ataxia is avoided. 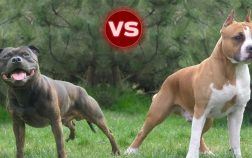 At first sight, the American Staffordshire Terrier (Am Staff) and the Staffordshire bull terrier (Staffie) seem to be identical. However, a seasoned eye will … Read More 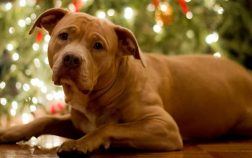 The AmStaff, a robust dog with a noble character The American Staffordshire is not classed as a group 3 (terrier) section 3 (bull) dog … Read More